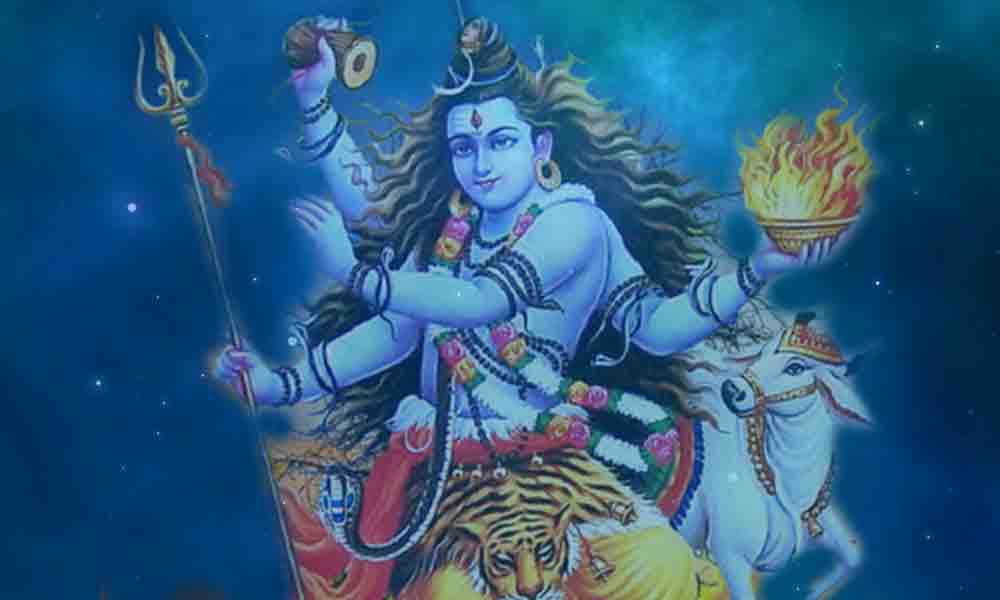 It is believed that Lord Shiva is the king of all dancers. He was an expert in the thandava style of dancing. This is a vigorous manly style of dancing. This stotra is about him while in the act of dancing. Alliteration and onomatopoeia create roiling waves of resounding beauty in this great stotra. This stotra which is so majestic was composed by none other than Ravana, the demon king, who ruled over Sri Lanka, who was one of the great devotees of Lord Shiva. Once the proud Ravana conquered the entire India and approached Mount Kailas on top of which Lord Shiva resides with his consort Goddess Parvathi. Ravana called Lord Shiva to come down. When he did not, he uprooted the mountain with his twenty hands. This made Goddess Parvathi jittery. Then Lord Shiva pressed down the mountain with his thumb. Ravana was crushed by the weight of the mountain. There he praised Lord Shiva by singing the Sama Veda and this great stotra composed by him. Lord Shiva was pleased andpardoned him.

From the forest of his matted lock, water flows and wets his neck,
On which hangs the greatest of snake like a garland,
And his drum incessantly plays damat, damat, damat, damat,
And Shiva is engaged in the very vigorous manly dance,
To bless and shower, prosperity on all of us.

The celestial river agitatedly moving through his matted hair,
Which makes his head shine with those soft waves,
And his forehead shining like a brilliant fire-daga daga,
And the crescent of moon which is an ornament to his head,
Makes my mind love him each and every second.

The consort of the ever sportive daughter of the mountain,
Whose mind rejoices at her side long glances,
With the stream of merciful look which removes hardships,
Makes my mind take pleasure in him who wears the directions as apparel.

He, with the shining lustrous gem on the hood
Of the serpent entwining his matted locks,
He, who is with his bride whose face is decorated
By the melting of red saffron Kumkum,
And He who wears on his shoulder the hide
Of the elephant which was blind with ferociousness,
Makes my mind happy and contented,
In him who is the leader of Bhoothas*.
* can be taken to mean as souls or mythical beings guarding Kailasa.

May he whose foot stool is decorated
By the ever flowing flower dust.
Falling the bent head of Indra and other Gods,
And may He, whose matted locks are tied by the king of serpents,
And may he, whose head is decorated
By the crescent moon who a friend of Chakora*
Shower prosperity for ever on me.
* A mythical bird which lives by drinking moon light.

May he with the raging fire
In his forehead, who burnt the God of love,
May He who is forever being saluted by king of devas,
And may he who has collected
The cool ambrosia like crescent moon on his head,
And may he who wears the collection of skulls,
Bless us to create wealth for us.

May He in whose dreadful forehead, fire burns "Dhahaga", "Dhaga,"
May He who burnt the one with five arrows* as an offering to fire,
May He who is the only one who can write decorative lines,
On the tip of the breasts of the daughter of the mountain,
And May He with three eyes make mind enjoy in him.
* The God of love

May He whose black neck is as dark
As several layers of new clouds,
Packed closely on the night of the new moon.
May He who wears the celestial river on his head,
May He who killed the Gajasura with an elephant head,
May He who is very handsome because of the crescent that he wears,
And may he who carries the entire burden of the world,
Bless us with all sorts of wealth .

Victory to the great Shiva, who has the fire burning in his forehead,
Which is increased by the breath of the snake wandering in the sky,
And to Him who dances to the changing tunes and fierce sound,
Of Dhimi, dhimi, dhimi coming out the auspicious drum.

When will I be able to worship that eternal shiva,
With a feeling of equanimity towards snake and a garland,
Towards great gems and dirt or friends and enemies,
Or Towards a blade of grass and lotus like eyes,
Or emperor and ordinary men.

When will I live the life of pleasure, meditating on Shiva,
Sitting near a hollow place near the celestial river Ganga,
Releasing all my bad thoughts and with hands clasped above my head,
After releasing all passion for the pretty women with shifting eyes?

This greater than the great prayer if read,
Remembered, or recited daily by man,
Will make him pure, eternal,
And he would get devotion to Shiva leading him to salvation,
For remembering Lord Shiva, is a sure method of removal of detachment.

He who sings this song composed by the ten headed one,
At the end of every worship or,
Reads it after worship of Shiva on the Pradosha day,
Will get by the blessing of lord Shiva, chariots, elephants and horses,
As well as the affectionate sight of god of wealth.

Thus ends the prayer of the dancing Shiva,
Composed by Ravana.