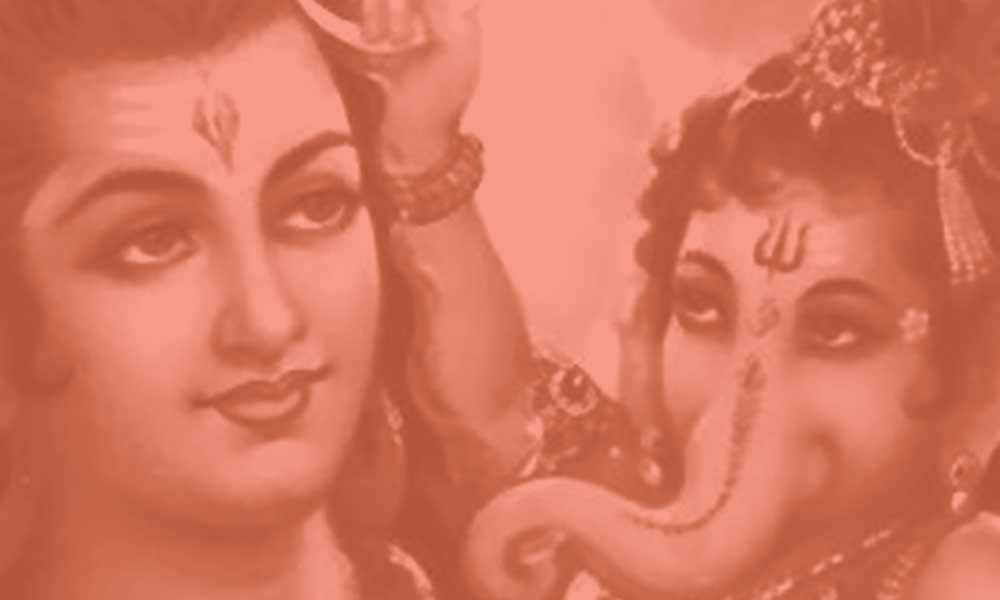 The author of this great prayer is possibly one of the greatest exponents of Bhakthi Marga (Path of devotion) Getting God intoxicated is his method for salvation. His chosen path is devotion to Lord Krishna. The fact that he has written this great stotra on Lord Shiva indicates the catholicity of this great teacher.

Salutations and salutations to him,
Who is the lord of the thirty gods,
Who is the Lord of all beings,
Who is perpetually gracious,
From whose head the waves of Ganga are born,
Who wears the crescent of moon
And who is the feast to the eyes of Gauri,

Salutations and salutations to Him,
Who is like the moon resembling the molten gold,
Who wears dress of the colour of blue lotus and rich cloud,
Who gives boons while he is dancing,
Who is the Lord of salvation,
And who has a bull in his flag.

Salutations and salutations to Him,
Who has moon, sun and fire as his eyes,
Who is the universal Shiva who dispels darkness
And who by his thousand beamed power,
Defeats thousands of moons and suns.

Salutations and salutations to Him,
Whose form shines like the gem,
In the head of the king of snakes
Who wears the skin of tiger,
Who has an effulgent form,
Who stands amidst a lotus
With one thousand petals,
And who wears lustrous
Amulets in his two hands,

Salutations and salutations to Him,
Who has anklets with bells tied to his lotus feet,
Who gives flowing nectar from his hands,
To his servant like devotees and make them happy,
And who dresses himself in rare gems,
With a request Please grant me your love lord Hari*.
* The author of this great prayer is a great Vaishnavite

Salutations and salutations to Him,
Who is the Lord of his bee like devotees,
Who chant of the names like Rama,
Govinda, Mukunda, Shauri, Krishna,
Narayana, Vasudeva and others like them,
Which would completely destroy all sorrows.
Note: The Catholicity of the author who is a follower of Vishnu is reflected in this verse.

Salutations and salutations to Him,
Who raises confidential curiosity,
In the minds of Sage Narada and others,
Who grants boons fast,
Who blesses his devotees with devotion to Hari,
And who is the teacher of every one.

My salutations to you who is an expert in singing,
Who is the feast to the eyes of his consort Gauri,
Who is the Lord of the soul and is interesting,
And who is always interested in the playful acts of Govinda,

He who filled with loving feelings hears,
This greatly wonderful octet on Shiva,
Would soon get the grace and love of Hari,
Get knowledge and divine realization.

This very musical stotra, describes oneself is a useless human being and not a devotee or fit to be a devotee but requests Lord Shiva for safety. The style of the sthothram points out, it to be a work of Aadhi Sankara. But this work is not listed in the complete works of Sankara. If any one knows the author, please communicate with me.

In all the eight directions, I am full of desires.
I am mad at travelling to countries outside,
I am having a mind which does not have peace,
My form looks like a way faring Asura.
And I am the one whose duties are never done,
So save me Lord Shiva who is Shambhu.

A vessel of flesh, bones, fat, shit and urine,
A body which is but a trick of imagination by the mind,
My thoughts tying my body with the vile of cupid,
And my thoughts are completely filled with illusion,
So save me Lord Shiva who is Shambhu.

My life is flowing ocean of illusions,
Drowned in imaginations leading to tumultuous mind,
And my desire being not serving your feet,
I am the worst among bad people,
So save me Lord Shiva who is Shambhu.

With banned and undesirable Dharma dancing in my mind,
With a defeatist attitude, without any doubt,
With all my body affected by the six types of problems,
I am the worst of the bad ones,
So save me Lord Shiva who is Shambhu.

Expert in passion rather than in Vedas,
Not worshipping your lotus like feet,
And not doing ritual according to Vedas,
I am not some one who follows Vedas.
So save me Lord Shiva who is Shambhu.

Interested in earning money by unfair means,
In love with ladies belonging to others,
Eating others food, having a dirty body,
I am one who does not follow rules,
So save me Lord Shiva who is Shambhu.

My body is subject of three types of sufferings,
I have forsaken the way for seeking salvation,
I have the feeling of having done bad to every one else,
And I am baser than the base human being,
So save me Lord Shiva who is Shambhu.

The father always protects his son, Oh God,
And you are father and helper of the universe.
And I have committed sins in all your works,
But you are the treasure house of Mercy,
So save me Lord Shiva who is Shambhu.