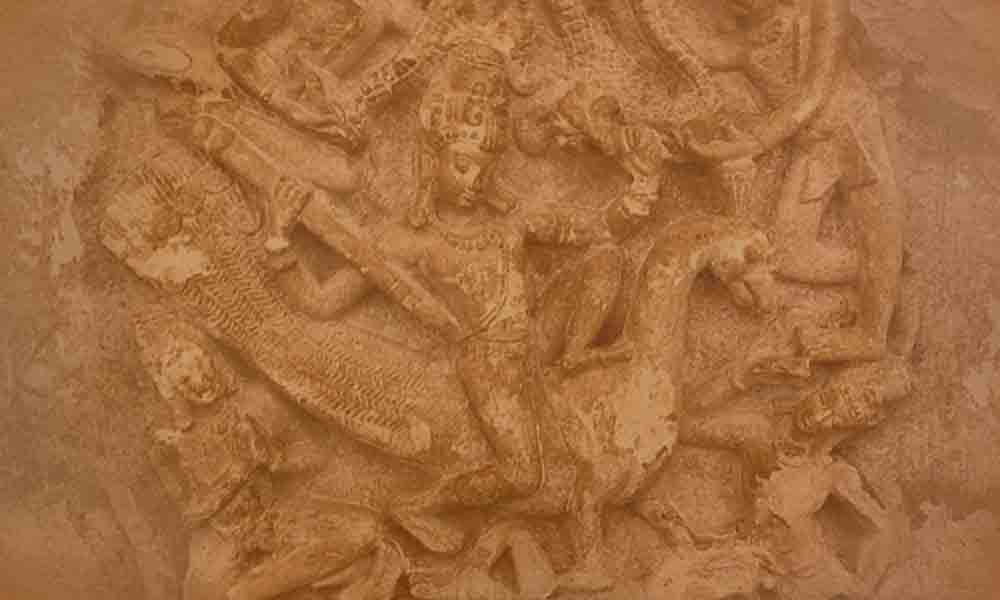 The elder (and according to some the younger) son of Siva and Parvathi goes by different names such as Skanda, Kartikeya, Murugan. Kumara and Subramanya. Though he is well known throughout India and probably of much older antiquity than Ganesha, his popularity is confined mostly to southern India and parts of Sri Lanka where we can find temples built in his honor.

Historically he is a god of great antiquity. Some of the Kushana coins bear the name and images of of Skanda-Kumaro-Bizogo (Skanda-Kumara-Vishakha) and Siva. 1 They also bear the title of Devaputra, probably as a mark of the king's divine origin and his identification with Skanda. The Yaudhehas, who played an important role in the decline of the Kushana empire, were also worshippers of Skanda Kumara and issued coins bearing his image and that of peacock. The Guptas were also worshippers of Siva and Skanda 2 as evidenced from the fact that one of the Gupta rulers had the name of Skanda Gupta (455- 467 AD) and another Kumara Gutpa (473-476 AD). Skanda Gupta played a significant role in saving northern India and the fledgling Hinduism from destruction in the hands of savage Huns. He also built some temples dedicated to Skanda and several mother goddesses.

Skanda was known in the Vedic period also. We find references to him in the Vedas, the Upanishads, the Puranas, the Mahabharata and Ramayana, Patanjali's Yogasutras and even some early Buddhist texts. He is believed to be of the nature of fire god Agni. It is interesting to note that with the spread of Brahmanism and later Saivism, Skanda Kumara became very popular in southern India, where several local deities and nature spirits, mostly worshipped by the local tribes and rural people were gradually identified with him and integrated into Saivism under the generic name Kumara or Kartikeya 3 .

Skanda in the Legends and the Puranas

According to the legend he was born to Siva and Paravathi to destroy the demon Tarakasura. Before he was born, Parvathi performed severe austerities so that he would have extraordinary skills and strength. He was born in a forest of (grass that grew like) arrows (sara vana) and there by earned the epithet of Saravanabhava. He was reared by six divine mothers from the constellation of Krittika, which earned him the name of Kartikeya. With six faces he suckled the milk of his six foster mothers and thereby earned the name Shanmukha. When he grew up, he became the commander-in-chief of the divine army which earned him the name of Deva Senapathi. His chief exploits include slaying of Tarakasura, Banasura and Pralambasura, protecting the yagna of Narada, tunneling through the mountain Krauncha, and a debate with Brahma in which he showed his true wisdom. He is considered to be eternal. Hence the name Kumara.

In his iconography he is depicted with one head and two arms or six heads and twelve arms. The six heads symbolically represent the five senses and the mind, the six tattvas and the six chakras. Originally a bachelor god, with the rise of Tantricism he became associated with two principal Shaktis, Valli and Devasena. The former came from a humble background while the latter is the daughter of Indra. His weapon is a lance with which he destroyed the demon Tarakasura.

The Skanda Purana and the Kumara Khanda from the Rudra Samhita of Siva Purana contain details of the birth and legends of Kartikeya. According to the latter, Kartikeya was born under strange circumstances. Agni swallowed the energy of Siva as per the wishes of gods, but much to the annoyance of Parvathi. Unable to bear the intensity of the energy Agni secretly impregnated the six wives of Rishis with it through the pores in their skin. After bearing the energy of Siva they were unable to carry it further. So they dropped it on the Himalayas. Himavant the mountain god was also unable to bear the energy. So he dropped it in the river Ganges. The goddess Ganges also could not bear the intensity of the energy. She managed to carry it for some distance and then left it in the middle of reeds where it eventually materialized into a beautiful baby named Kumara.

According to this legend, the energy of Siva passed through six carriers and six places before becoming Kumara. Hence he is associated with number six and worshipped for six days in the lunar month. After his birth, he was picked by his six mothers who reared him for some time before he was summoned by Lord Siva to undertake an expedition against the demon Tarakasura. All the gods and goddesses equipped him with various weapons and gifts and also accompanied him to the battle field where he slew the demon and saved the worlds from anarchy. After this his fame grew as a god of wisdom and might, protector of the weak and restorer of dharma. The Kumara Khanda also informs that besides Tarakasura, he slew other demons like Tarakasura, Banasura and Pralambasura and helped gods in restoring peace and divine order.

1. The early Kushanas worshipped several deities some of whom were Hindu, some Iranian and some Buddhist. The most famous of the Kushana rules, KanishkaI became converted to Buddhism just as Asoka was.

2. The Guptas were mainly worshippers of Vishnu, but they also worshipped other gods and goddesses in whose reverence they built several temples.

3 In south he is popularly known as Murugan. It is common to see people confusing one for the other and interpreting that Skanda Kumara was originally a tribal god and that he was subsequently integrated into Hindu pantheon. The fact is Skanda Kumara is a very ancient Hindu/ Vedic god who was worshipped by rulers of northern India from earlier times. When Brahmanism spread to the southern India,  several local deities were integrated into Hinduism and Murugan was one such god.  Murugan was originally a tribal deity who was worshipped for protection against snakes and protection of young girls. There is no doubt that he was also a very ancient Dravidian god. His temples are found mostly on hill tops. His consort Valli Amma comes from a tribal family.  Descriptions of him and his festivals allude to some connection with serpents and serpent worshipping tribes. Because of similarities Murugan and Skanda  and the popularity of Saivism in south, he was probably admitted into the Hindu pantheon as Kartikeya or Skanda Kumara. His wife Valli Amma became a shakti of Kumara, the other being Devasena, a daughter of Indra, the Vedic god.