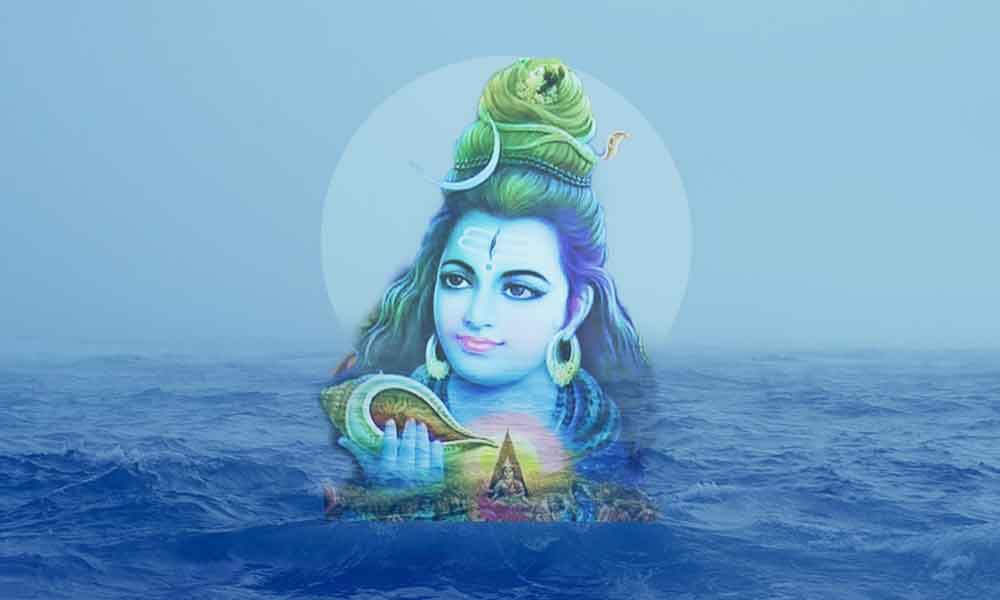 1-5. The Devî said:--Getting up from the bed early in the morning, one is to meditate on the thousand petalled lotus, bright, of the colour of camphor, in the top part his brain on the head. On this he should remember his S'rî Guru, very gracious looking, well decorated with ornaments, with His Consort S'akti and bow down to Him and within Him he should meditate the Kundalinî Devî thus --"I take refuge unto that Highest S'akti Kundalinî, of the nature of the Supreme Consciousness, Who is manifestm Chaityana while up-going to the Brahmarandhra (the aperture supposed to be at the crown of the head, through which the soul takes its flight at death) and Who is of the nature of nectar while returning back in the Susumnâ canal.

After meditating thus, he should meditate on the Blissful Form of Mine within the Kundalinî Fire stuatea in the Mulâdhâra Lotus (coccygeal lotus). Then he should rise up to go for the calls of nature, etc., and complete Sandhyâ, Bandanams and other duties. The best of the Brâhmins, then, should for My satisfaction perform the Agnihotra Homa and sitting in his Âsana make Sankalap (determination) to do My Pûjâ (Worship).

N. B.--The brain has three divisions, the lower, the middle and the higher, or top-most part which is very pure.

6-10. Next he is to make Bhûta S'uddhi (purification of elements of the body by respiratory attraction and replacement) and then the Mâtrikâ Nyasa, Then he should arrange the letters of the root Mantra of Mâyâ and execute the Hrîllekhâ Mâtrikâ Nyâsa. In this he is to place the letter "Ha" in the Mulâdhâra, the letter "Ra" in his heart and the vowel "î" in the middle of his brows aud, Hrîm on the top part of his head. Finishing then all the other Nyâsas according to that Mantra, he should think within his body Dharma, Jñâna, Vairâgyam, and Prosperity as the four legs of the seat and Adharma, Ajñâna, Avairâgyam and non-prosperity, these four as the body of the seat on the four quarters East, South, West and North. Then he should meditate on the Great Devî in the lotus of his heart blewn by Prânâyâma, situated on the five seats of the Pretas. O Mountain! Brahmâ, Visnu, Rudra, Sadâs'iva and Îs'vara are the five Pretas situated under My feet.

12. Meditating on Me thus and worshipping Me with his mind concentrated, he is next to make Japam (reciting My name slowly). After Japam he is to make over the fruits of Japam to Me. He should then place the Arghya for the external worship.

13. Then the worshipper is to sprinkle vith the Astra mantra 'Phat', all the articles of worship that are placed in front of him and purify them.

14-18. He should close the ten quarters with the Chbotikâ Mudrâ and bow down to his Guru. Taking his permission, he should meditate on the outside seat, the beauiful divine form of his heart lotus and invoke the Deity outside and place Her on the seat by Prâna Pratisthâ and perforn Âvâhana, and present to Her Arghya (an offer of green grass, rice, etc., made in worshipping a god), Pâdya (water for washing legs and feet), Âchaman, water for bath, a couple of clothes, all sorts of ornaments, or scents, flowers and the necessary articles with due devotion and he should worship the attendant deities of the Yantra. If one be unable to wurship daily the attendant deities, one wust worship them on Friday.

19. Of the attendant deities, one must meditate the principal deity of the nature of Prabhâ (illumination) and think that by Her rays the three worlds are pervaded.

20. Next he should worship again the Bhuvaues'vari Devî, the Chief Deity along with other attendant deities with scent, good smelling flowers; and Naivedya and various other tasteful dishes.

21-22. He should then recite the Sahasranâma (thousand names) stotra and the Devî Sûkta Mantra "Aham Rudrebhih, etc.," and "Sarve vai Devâ Devî mupatasthuh etc.," the Devî Atharva S'iro Mantra and the Upanisads' Mantra of Bhuvanes'varî, the famous mantras, repeatedly and thus bring My satisfaction.

23-24. With hearts filled with love and with hairs standing on their ends all should satisfy Me frequently with tears of love flowing from their eyes and with voice choked with feelings and with dancing music and singing and with his whole body filled with joy.

25. My glory is well established in the Veda Pârâyana and in all the Purânas. So for My satisfaction, one should offer daily to Me one's everything with one's body and recite the readings from the Vedas.

26-27. Next, after completing the Homa offerings, he should feed the Brâhmanas, tha young virgins well clothed, the boys and the public and the poor, thinking all of them to be so many forms of the Devî. Than he should bow before the Devî that resides in his heart and finally by Samhâra Mudrâ take leave of the Deity invoked.

29. I am always reflected in this Mirror of Hrîllekhâ form; so anything offered in this Hrîllekhâ Mantra of Mine is offered as it were with all the Mantras. Then one should worship the Guru with ornaments, etc., and think oneself blessed.

30-31. O Himavan! Nothing remains at any time unavailable to him who worships thus the Bhuvanes'varî Devî. After quitting his body, he goes to theMani Dvîpa, My Place. He gets the form of the Devî; and the Devas constantly bow down to him.

82-45. O Mahîdhara! Thus I have described to you the rules of worshipping the Great Devî; consider this in all the aspects and worship Me according to your Adhikâra (claim) and you will attain your Goal. There is no doubt in this. O Best of mountains! This S'âstra Devigîtâ you are not to tell to those who are not the devotees, to those who are enemies, and to those who are cunning. If one gives out this secret of Gîtâ, it is like taking off the covering from the breast of the mother; so carefully keep it secret and think that this is very necessary. This Devî Gîtâ ought to be given to A disciple, a Bhakta, the eldest son, and to one who is good natured, and well dressed and devoted to the Devî. O Mountain! In the time of S'râddha (solemn obsequies performed in honour of the manes of deceased ancestors) he gets the highest place of the Pitris who reads this Devî Gîtâ before the Brâhmanas. Vyâsa said:--The Devî vanished there after describing all these. The Devas were glad and considered themselves blessed by the sight of the Devî. O Janamejaya! The Haimavatî next took Her birth in the house of the Himâlayâ and was known by the name of Gaurî. S'ânkara, the Deva of the Devas, marricd Her. Sadânana (Kâtrtika) was born of them. He killed the Tâdakâ Asura. O King! In ancient times, when the ocean was churned, many gems were obtained. At that time the Devas chanted hymns to the Devî with a concentrated mind to get Laksmî Devî. To show favour to the Devas, Ramâ Devî got out of the ocean. The Devas gave Laksmi to Visnu, the Lord of the Vaikuntha. Visnu was very glad at this. O King! Thus I have described to you the Greatness of the Devî and the birth of Gaurî and Laksmî. One's desires are all fulfilled when one hears this. O King! This secret I have described to you. Take care not to divulge it to any other body. This is the secret of the Gîtâ; so carefully conceal it. O One of pure heart! I have told to you this Divine and Sin-destroying narration, that you asked. What more do you want to hear? Say.

Here ends the Fortieth Chapter of the Seventh Book on the External Worship of the Devî in the Mahapurinsm, S'rî Mad Devî Bhâgavatam, of 18,000 verses, by Maharsi Veda Vyâsa.