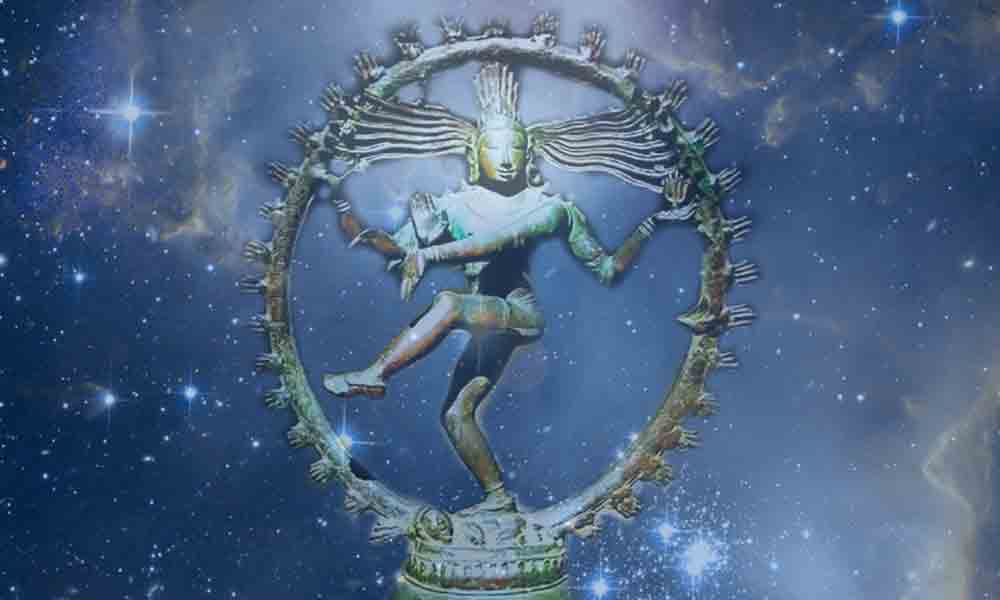 The symbolism of Siva Nataraja is religion, art and science merged as one. In God's endless dance of creation, preservation, destruction and paired graces is hidden a deep understanding of our universe. Aum Namah Sivaya. - Dancing with Siva.

Else where we have discussed the meaning and symbolism of the dance of Nataraja. In this article we will try to cover a few more aspects. Nataraja is Siva in the form of the Lord of the Dance. He represents the combined might of the dynamic universal energy and the awakened Brahman or Saguna Brahman. He is the source of all life, activity (chetana) and vibration (spandana). His dance is the dance of creation.

The circle of fire that surrounds Him is His primal energy that flows out of Him and again into Him. The being lying at His feet is the jiva or the deluded soul whom he shapes through a painful process of karma and suffering and liberates Him in the end from bondage.

His dance is rhythmic, regular and perfect. It is the Rtam (rhythm) of divine perfection, which is hidden in the entire universe as an underlying current or subtle vibration. It manifests itself in many things, in the regularity of the seasons, the movement of the planets, the cyclical nature of creation, the physical, chemical and biological laws of our universe, the biorhythms of our bodies and the constitution of our cells, molecules and atoms.

The duality or multiplicity of objects in the image is for the beholder but in truth it is one complete image of the supreme Siva. Whatever that may appear to us as separate parts of one image is but an illusion that arises because of our experience of duality. The energy or shakti that manifests out of Him as a ring of fire is not separate from Him because it cannot hold itself or survive without Him. So is the apasmaramurthy under His feet. If you look carefully, the being is not separate from Siva. It is connected with Him as well as with the rest of the creation. The idea that he is suffering being crushed by the feet of Siva is an illusion of our minds, a projection of our thought and an idea that exists in our minds because when we look at the image of Nataraja we, as limited beings, identify ourselves with the apasmaramurthy lying at His feet, but not with Siva, the dancer. The circle of His energy starts from there and also ends there. There in lies the mystery. The whole of the image is an assurance to us that creation is not a chaotic and accidental phenomena but a guided and rhythmic movement under the mastery and control of the eternal self and that we too can become masters of our own movements and action by liberating ourselves from the limitations of smallness (anava) and delusion (apasmara).