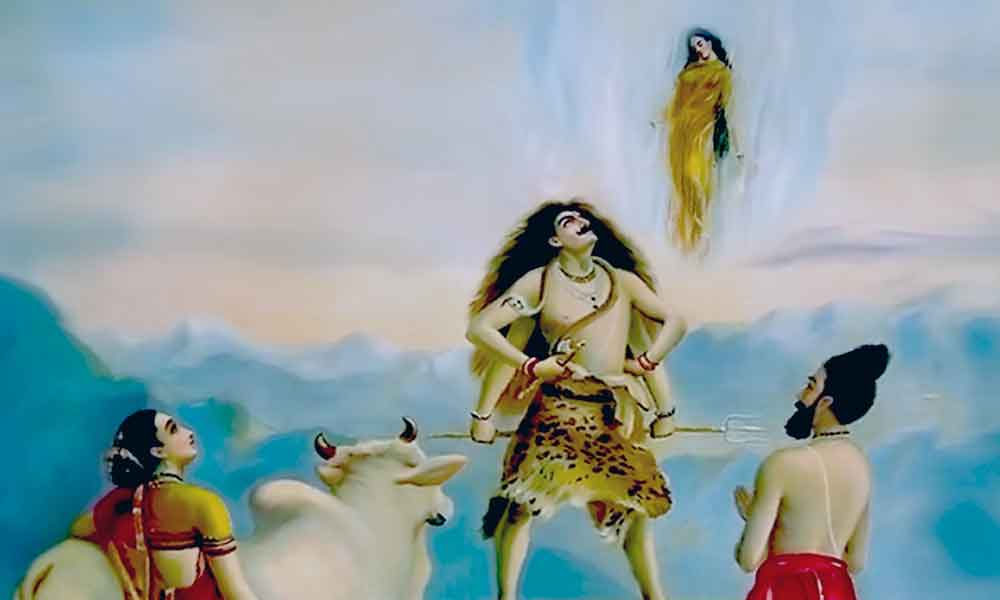 The ancient Puranic story of how the sacred River Ganga which eternally flows in the heavens descended into earth consciousness and began flowing upon earth.

There came a sage whose name was Bhagīratha: he stayed in a forest of Himalaya practising terrible austerities. For a thousand years he remained with arms upraised, with four fires burning around, and with the sun blazing upon him. At last Brahma had compassion upon him. The Lord of All came to that sage and told him he could ask a boon as a reward for his austerities.

Then the sage said, "The boon I ask is that King Sagara's sixty thousand sons win to Indra's heaven. Their ashes lie far down in the earth. And until a water which is not the water of earth flows over the ashes and purifies them they cannot win to heaven." The Lord of All was pleased with what the sage asked, and the boon was granted.

And so Brahma promised that Gangā would descend upon earth. Now Gangā was the daughter of Himalaya, the Lord of Snow, and she had held herself back from leaving the heaven-world. She would leave at Brahma's command, but her downward rush would be so terrible that the earth would be dashed to pieces by it. Only one thing could save the earth from that tremendous stroke: if the head of Shiva received her stream the fall of Gangā upon earth would be broken.

Shiva, moved by the prayers of the great ascetic, agreed to take the fall of Gangā upon his head. He went forth with his trident, and standing upon a high peak he bade the daughter of Himalaya descend upon the world. She was made angry by his imperious call. "I shall descend, and I will sweep Shiva away," she said. And so, in a mighty fall, Gangā came down from the heaven-world.

But Shiva, knowing what Gangā would have done, smiled to himself. He would shame her for her arrogance. He made her streams wander through the locks and clusters of his hair. For seasons and seasons Ganga wandered through them as through the forests of Himalaya, and she was made ashamed by her powerlessness to reach the earth.

Then the sage, not seeing the river come down, prayed to Shiva once more, and once more went through awful austerities. Shiva, for the sake of Bhagīratha, allowed Gangā to make her way through the locks and clusters of his hair and come down upon the earth.

In seven streams she descended. The Gods came in their golden chariots to watch that descent upon earth, and the flashing of their chariots made it seem as if a thousand suns were in the sky. Fish of all kind and colours, dolphins of every shape and hue, flashed in the river. And sages and saints came and purified themselves in the water, for the stream that had wandered upon Shiva's head made even the wicked pure. The Gladdener, the Purifier, the Lotus-clad, the Faireyed, were the names that were given to four of her seven streams. Three flowed to the east, three flowed to the west. The middle stream, the fullest, the clearest, flowed to where Bhagīratha waited in his chariot. He drove on, and where he drove, there did the bright, full, clear river flow.

On and on it flowed, following the chariot of the sage: now it was a sweeping current, and now it went on as though it was hardly able to bear on its wave the feather of the swan, and now full and calmly it flowed along. At last it came to the wide sea. There it sank down, and as it sank into the middle of the world the sage prayed that it would purify the ashes of King Sagara's sixty thousand sons.

In an age before, King Sagara and his sixty thousand sons had been on the earth. The king would have himself proclaimed a world-ruler, and that this might be done a steed was loosed and set to range the distances. All the land the steed ranged over would be proclaimed the king's domain, and when the steed returned it would be sacrificed to the Gods. But Sagara's steed was stolen and led down into the very middle of the earth. The king commanded his sixty thousand sons to find the steed and bring it back for the sacrifice.

As they came near he turned a flame upon them, and the sixty thousand sank down in heaps of ashes. Kapila went on with his meditation and thought no more upon the destruction he had brought upon King Sagara's sons. The king then sent his princely grandson to find die steed. He came down to the very middle of the earth. He passed the immortal elephants; he found the steed grazing near Kapila and he saw the heaps of ashes that were there. Then the bird Garuda that was flying there told him of what had befallen the sons of King Sagara, and told him, too, that they could win to Indra's heaven only when Gangā was brought down and made flow over their ashes.

The prince led the steed back to Sagara. He became king after his grandfather, and when his duties as king had been fulfilled he went into a forest of Himālaya and engaged in sacrifices to bring Gangā down from the heaven-world. After him his son engaged in sacrifices. Then his son's son, the sage Bhagīratha, engaged in austerities that had never before been known, and these austerities won Brahmā's compassion, and so, with the mighty aid of Shiva, Gangā was brought down upon the earth.

There where Kapila ponders, sustaining the world, Ganga flowed. The river went over the heaps of ashes that were the sons of King Sagara. They were purified, and the sixty thousand, rejoicing, went into the heaven of great Indra.

Source: From The Orpheus Myths of the World by Padraic Colum Illustrations by Boris Artzybasheff [1930, copyright not renewed]