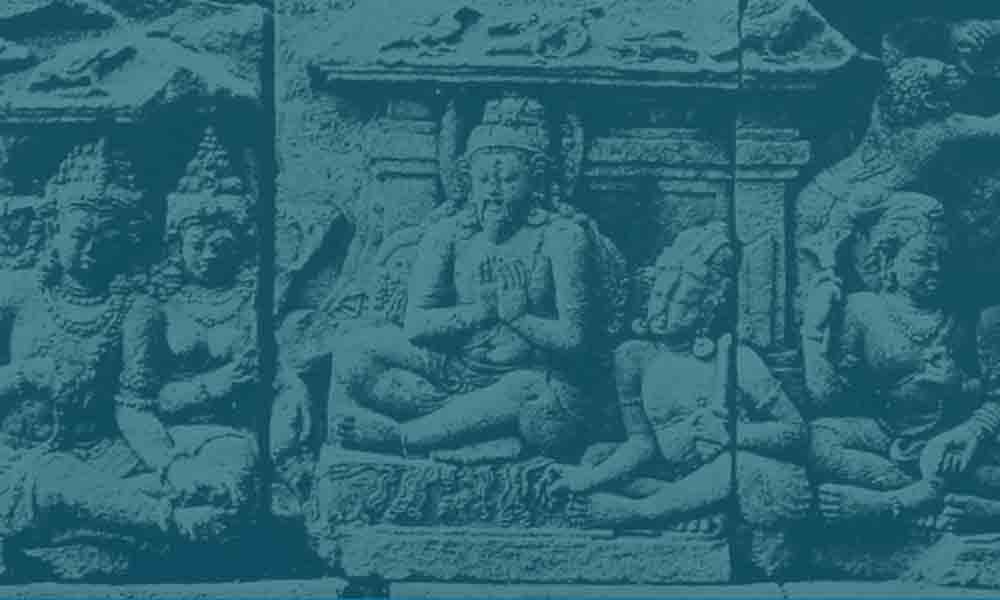 A white genie, "jewel of the world," lives in the sun and guards the gates of the sky. He has a brother, with seven heads, king of all the jinn. This white genie is entitled Maharaja Dewa, a Malay corruption of Mahadeva, the blue-throated Siva. The distinction between this white genie and his black brother, who lives in the moon, is sometimes obliterated, as in the invocation used when opening the stage for a ma'yong play:--"Peace be upon Mother Earth and Father Sky! ... Peace be upon thee, Black Awang, king of the earth! ... Peace be upon the blessed saints at the four corners of the world! ... Peace be upon my grandsire, Batara Guru, the first of teachers, who became incarnate when the body was first created, teacher who livest as a hermit in the moon, teacher who rulest in the circle of the sun, teacher of mine whose coat is of green beads, teacher of mine whose blood is white, who hast but one bone, the hair of whose body is upside down, whose muscles are stiff, who hast a black throat, a fluent tongue and salt in thy spittle."

Incidentally it is interesting to find the Malay still paying homage to Siva as Nataraja, lord of dancers and king of actors, though to-day he is quite unaware of this name and róle of the Hindu god whose theatre is the world and who himself is actor and audience. In another Malay invocation the Black Genie too is painted as "having but one bone, the hair of whose body is upside down, who can assume a thousand shapes." Though he has "one foot on the heart of the earth," yet this Black Genie also "hangs at the gate of the sky."

Batara Guru or Divine Teacher is the Malay name for Siva. And it is not surprising to find that on accepting the Hindu deities into their spirit-world Malays paid great homage to Siva under his sinister aspect of Kala the destroyer of life. Anyhow, here are the white spirit of the sun and the black spirit of the moon identified with manifestations of Siva. The spirit of the tides is often associated with the spirits of the sun and moon, and, again, the Malay expressly identifies him with Siva and makes Kala the dread god of the sea.

Furthermore, in Malay mythology there is a Spectre Huntsman, whom magicians identify with Siva. This Spectre Huntsman is even known by the various Malay appellations of the Divine Teacher such as "Raja of land-folk," "Raja of Ghosts," and "Gaffer Long Claws." Now Siva, of course, was the Rudra of Vedic times. And it has been pointed out how in Rudra are found the same characteristics that distinguish the German Wodan (or Odin), namely those of a storm-god followed by hosts of spirits, a leader of lost souls, identified both in Malay and German legend with the Spectre Huntsman. The association by Malays of the Spectre Huntsman with Siva clearly corroborates the relationship between Rudra and Wodan and lends colour to the theory of an Indo-Germanic storm-god, the common source of the Indian and Teutonic myths.

The identification of Siva with Gaffer Long Claws finds a parallel among the Bhils, Kols and Gonds of India, who also confound him with a chthonic tiger-god. And like those tribesmen the Malay appears sometimes to confuse Siva with Arjuna, calling that demigod the earth spirit and king of the sea.

Last phase of all, Siva becomes father and king of the jinn imported with Islam. Even his white bull Nandi is yoked to the service of the new religion. According to early Hindu mythology Brahma, or according to later belief Vishnu, took the form of a boar and raised the earth out of the waters. Other stories current in India make an elephant or a bull the support of the earth. Muslim cosmogony definitely places the earth on a bull with forty horns having seven thousand branches, a beast whose body stretches from east to west. So the Kelantan magician invokes "the father and chief of all jinn practising austerity in the stall of the black bull who supports and fans and shakes the world." The idea that the king of the jinn is the father of seven children may be connected with the Muslim notion of seven earths.

The wife of Siva is known to Malays as Mahadewi "the great goddess," as Kumari "the Damsel," and above all, as Sri, goddess of rice-fields. As Sri she may be said to have taken the place of "Mother Earth," just as her divine spouse represented "Father Sky." As Kumari she is supposed in the north of the Peninsula to have been made by Gaffer Mahsiku out of a bit of eaglewood. (In Patani a name for the earth spirit is Siriku.) The goddess married her creator. But the legend adds that she had one daughter by the god (deva) of the moon and one by the god of the sun, a remarkable preservation of the Malay myth that the Divine Teacher under different manifestations lived in both those luminaries. The same tradition adds that Kumari is invoked against lock-jaw and dumbness, because she made her eldest daughter live on a hill as an ascetic with her mouth wide open till it grew into a cave which Hanuman entered!

The Malay magician often vaunts that "the sword of Vishnu is before his face" to protect him. And with Siva, Brahma, Kala and Sri, this god presides over the five divisions of the old-world diviner's day. Brahma is known as Berma Sakti, but hardly enters into Malay magic. In Kelantan, Krishna is said to be entreated to cure snake-bites and the stings of scorpions and centipedes. Ganesha, under the name of Gana, is little more than a village godling.

The Hindu demons and demigods that have found a place in the magic of the Malays may be conveniently inserted here. Of most of them the magician has only a literary knowledge. The Asuras exalted demons that war not against men but gods, are represented by Rahu, who causes eclipses of the sun and moon, and to the Malay mind is a huge dragon. Danu, a demon relation of his in Hindu mythology, is the serpent who inhabits the rainbow. In the north, where plays founded on the Ramayana are popular, Sri Rama, the hero of that epic, is a demigod invoked especially in charms connected, with the hunting of elephants, and Hanuman, the monkey-god, is an evil spirit with the face of a horse and the body of a man. There, too, the great Rishis or sages are invoked, and the magician takes shelter behind the name of Narada and the name of Samba, his derider.

Bhuta and Raksasa are often mentioned as demons even by Malay peasants. But to-day, at any rate, acquaintance with them is due mainly to popular romances that have come from the Deccan. The Malay will turn, for instance, to the story of Marakarma and read of a Raksasa who lights a fire as big as a burning town, pours rice on a mat a hundred yards wide, and eats it along with spiders, centipedes, lizards, flies, rats and mosquitoes that, overcome by the steam, drop on to his food; he drinks a well of water, hiccups like thunder, and picks from his teeth with a log chunks of food so large that they kill cat, goose or fowl by their impact. Of the cousinship between the Indian Bhutas and the Indonesian spirits of men who have perished by violence so little is known that in one account the Spectre Huntsman is called a Bhuta and in a Perak charm the great goddess Sri is described as the "Genie Bhuta Sri who presides over rice-fields!" But in fact it is not these immigrant demons that are the concern of the Malay magician.

For centuries the Muhammadan zealot and more recently the Ford car have invaded the fastnesses where Malaya's illiterate priests of Siva invoked these alien deities. The Hindu gods continue to survive in invocations degraded to magical charms. Still, too, at the installation of a Perak Sultan the real Hindu name of the demigod, who descended on a Mount Meru in Sumatra and became the father of most of the royal houses of the Peninsula, is whispered by Sri Nara 'diraja, keeper of the State secret, into the ear of the new ruler. He and his master are perhaps unaware that so at the initiation of a child into one of the higher Hindu castes his teacher whispers a formula containing the name of the god who is to be his special protector through life. It is to be hoped that fanaticism will never extinguish this voice from the past.

Source: Shaman, Saiva and Sufi A Study of the Evolution of Malay Magic, Chapter 2 Gods, Spirits and Ghosts by R. O. WINSTEDT